In 2020 we have taken our sound mapping farther afield taxonomically by tackling birds. Bobolinks are a relatively common (but declining) grassland bird in the Northeast. During their breeding season, the calling males can be raucous. We asked, 'Can we use maps of Bobolink calling to assess their use of hay fields?'. 2020 intern Stephanie Ripsom joined with Jill Jakimetz to create a 24-hour sound mapping of one of our Bobolink field. For more on this work, please see Stefanie's blog post; Stephanie also mapped insect sounds and is doing analyses to compare Bobolink and insect use patterns. 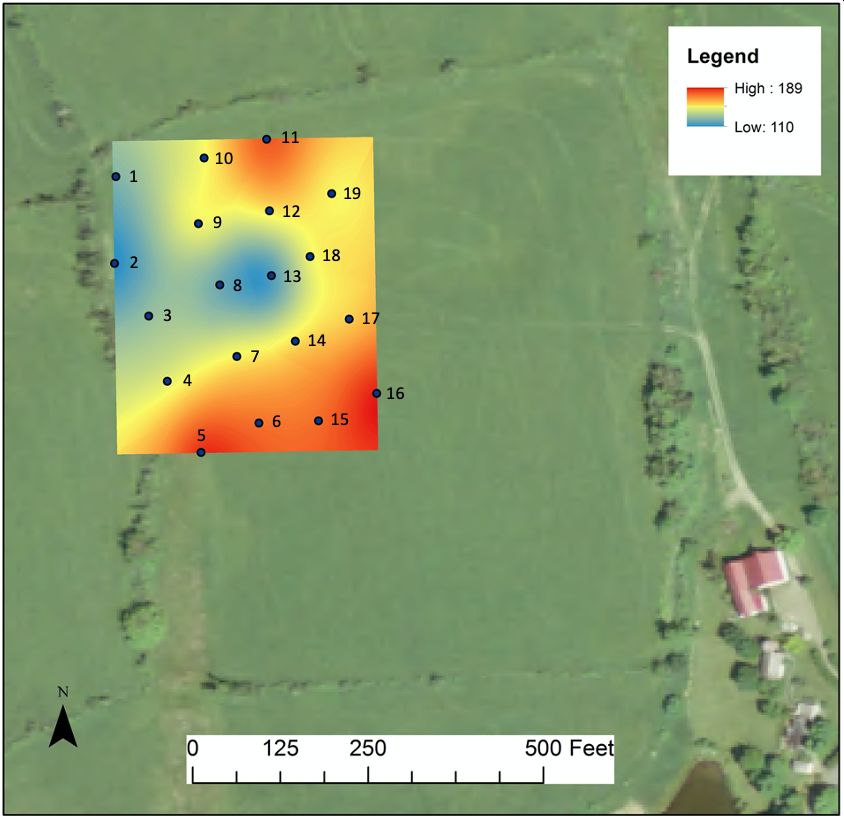 In 2019, with the electronic engineering expertise of Julius Madey and the hard work of intern Molly Fava in the field and in the lab, we created our first 24-hour sound maps. These were made using 20 DIY programmable field recorders built by Mr. Madey (and hence affectionately referred to as the "Jules1 units"). These units recorded for two minutes during each hour. Our hope is to use this technique to both connect the public with another aspect of the natural world around them and to describe and compare Orthopteran habits in various local landscapes such as differing farm systems.

Below are videos that Molly made to illustrate our results: 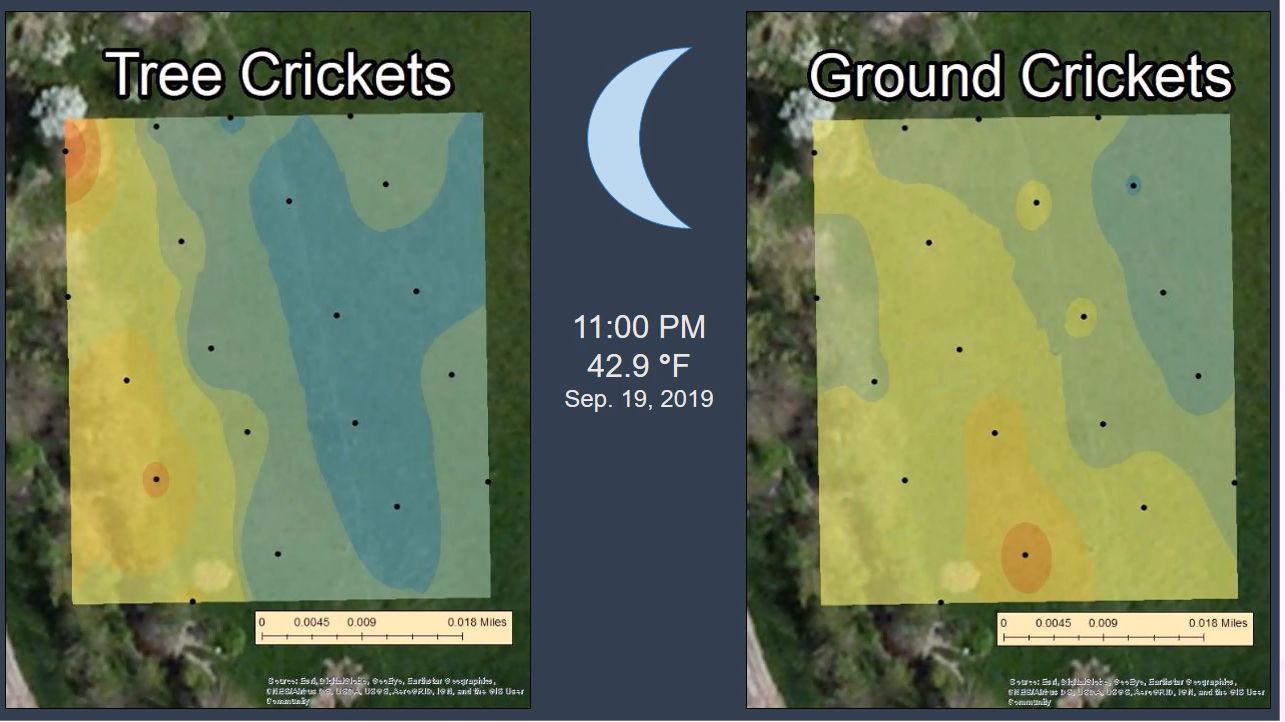 A four-minute mp3 video from our second field site. 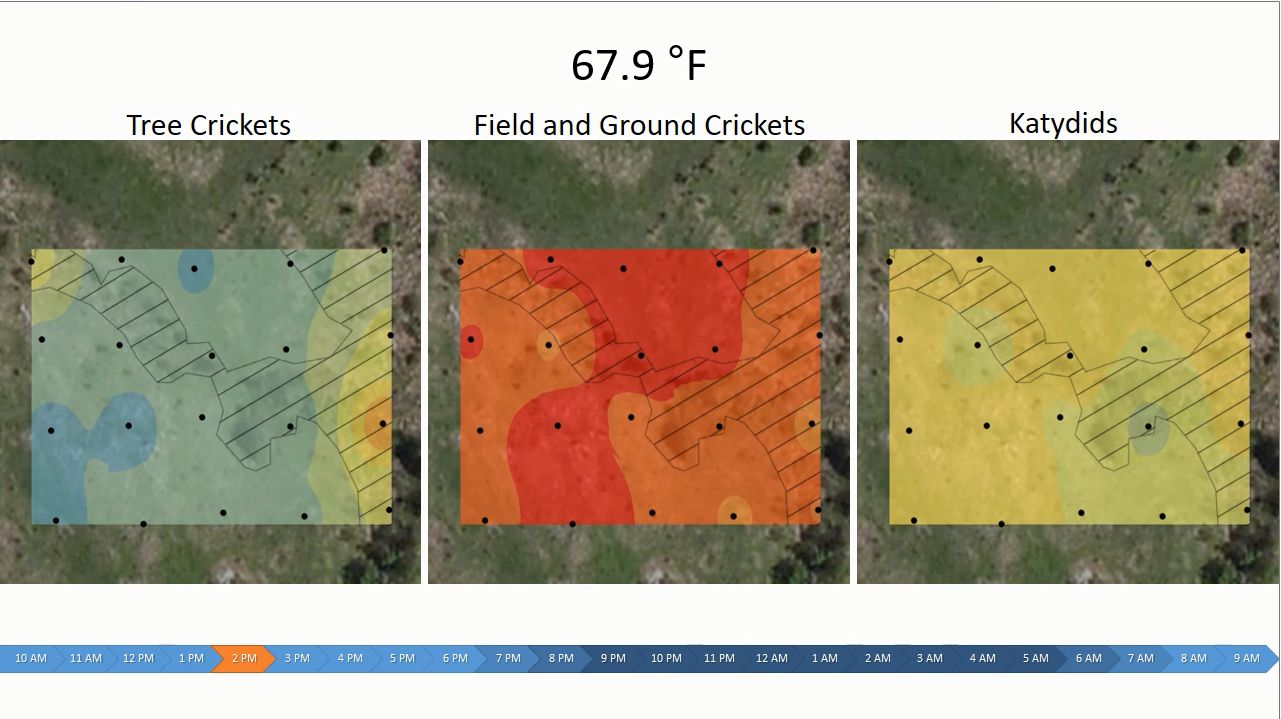 A seven-minute video from our first field site.

We hope you enjoy these. The text below describes our methods before the creation of the Jules1. While we have updated our approach, the general logic remains the same.

Sound maps are an approach we use to look at the habitats of some of our singing insects. In late summer, the fields, hedgerows and even forests can be alive with various drones, trills, chirps and rasps. Many (although not all - cicadas also join the concert) are made by what entomologists call "Orthopterans", that is katydids, ground crickets, tree crickets (such as the one below), grasshoppers and the like. 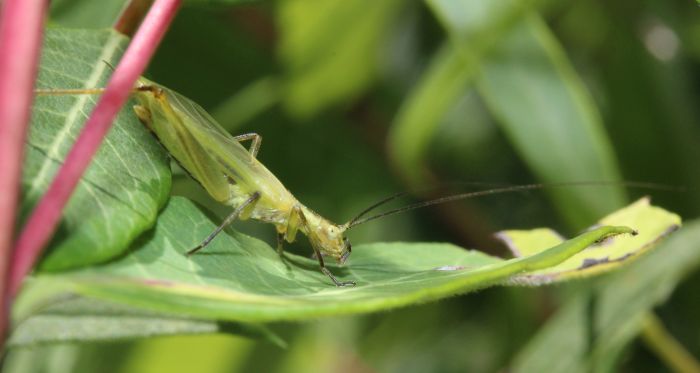 Our quest was to walk into a late-summer landscape and try to tease out the sounds of individual species and map the areas where they were calling most loudly. This page briefly introduces our technique and illustrates some of the results. Dylan Cipkowski, our field tech, took pictures (like the one above) and helped to make many of the sound maps. 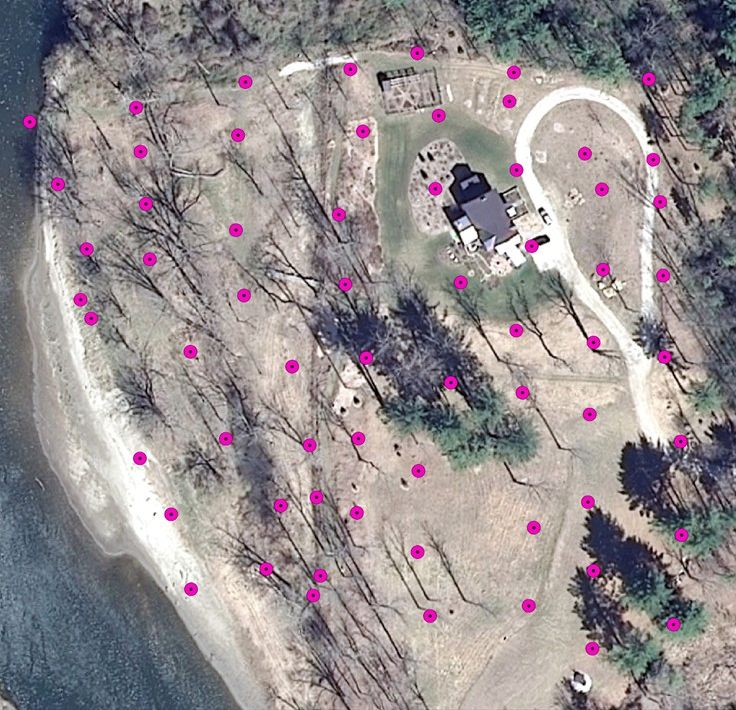 As the above image illustrates, we establish a recording grid on each property we want to map. We walk that grid with a hand-held recorder, stopping at each point to make a brief recording and note the waypoint. We then go through the resulting sound files using Raven, a call analysis program made by Cornell, and begin identifying the sounds made by various insects. 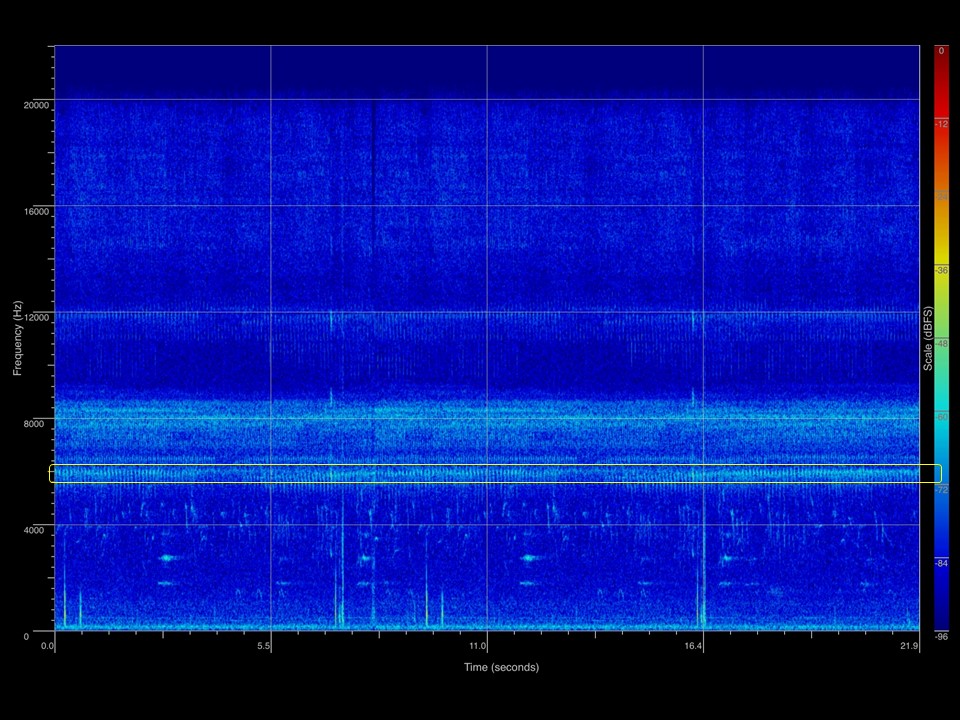 The above is a so-called sonogram which shows the intensity of sound at various frequencies over time. The lighter the shading, the more powerful the sound. In this case, we've outlined a trill at roughly 6000 Hz, probably the work of a species of tree cricket.

We then looked at our sound files and, using the software, measured the intensity of sound at our chosen frequency at each point. This produced the data illustrated below, where the annotations are the sound's power in decibels. 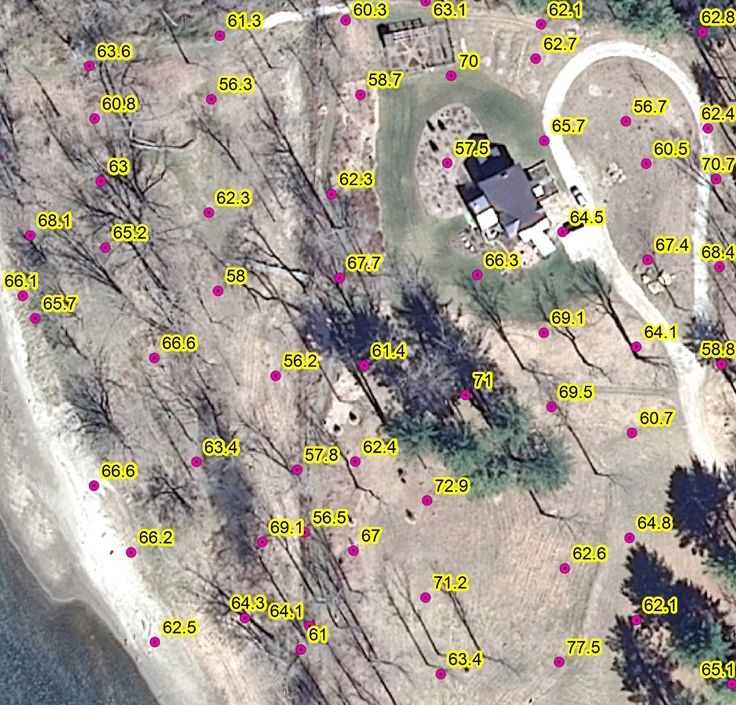 Finally, we took this grid of numbers and asked our mapping program to pretend that these represented altitudes and to make a topomap of this area. However, we made that topomap with colors rather than lines and, in this case, redder zonse indicated louder areas, and blue zones, quieter areas (for this example, we looked at a call in the nieghborhood of 4000 Hz). 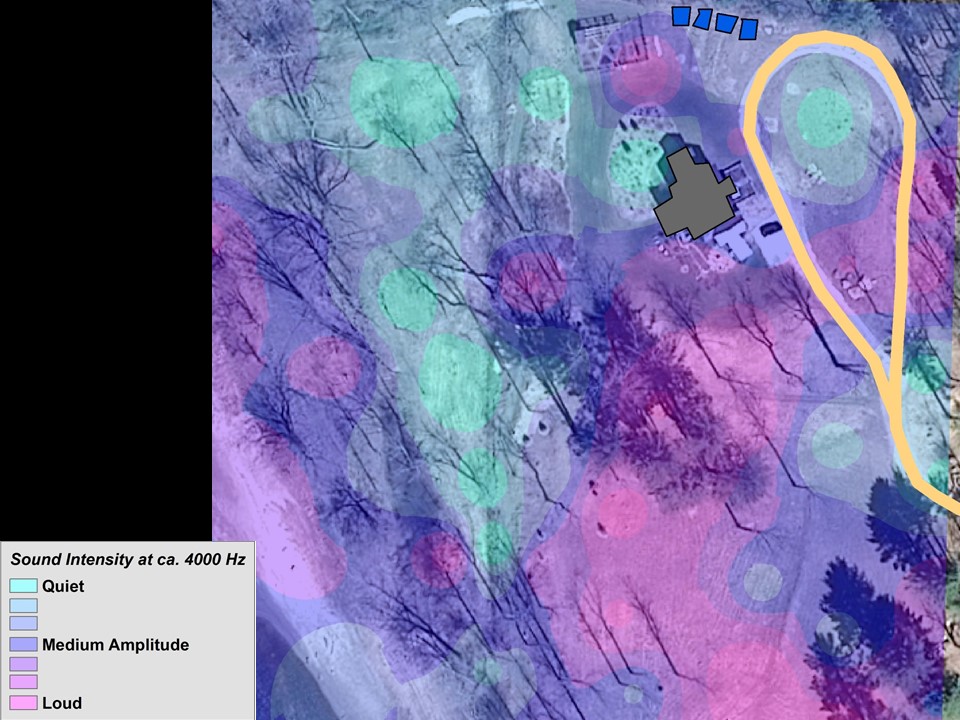 These maps help us see the patterns of insect occurrence. For example, the creature mapped above seemed to favor the treed areas. We made similar maps looking at various calling insects on several orchards we studied. These are shown below using a slightly different color scheme, although red is still loud and blue is still quiet. We've also included excerpts from some of our field recordings (edited to remove other sounds). 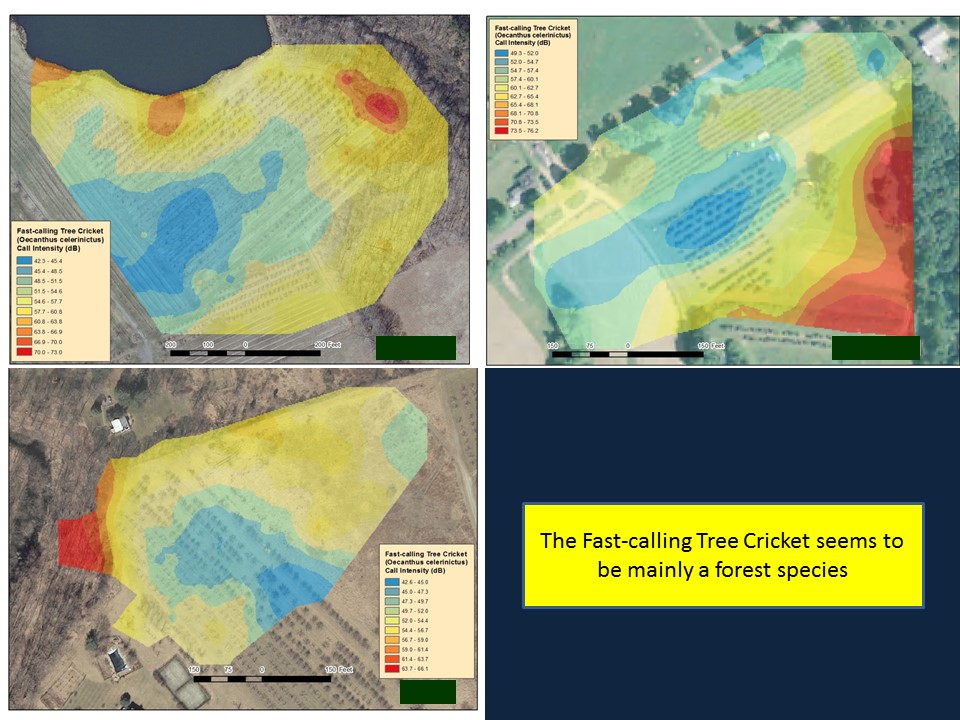 Want to hear what we think was a Fast-calling Tree Cricket? Listen to this: 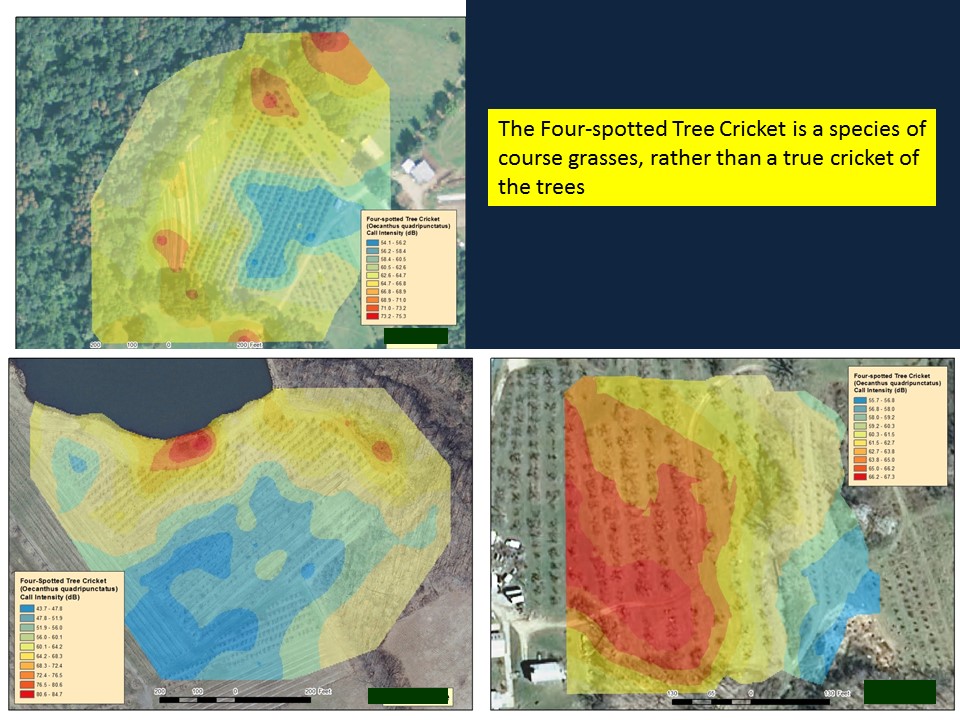 Want to hear what we think was a Four-spotted Tree Cricket? Listen to this: 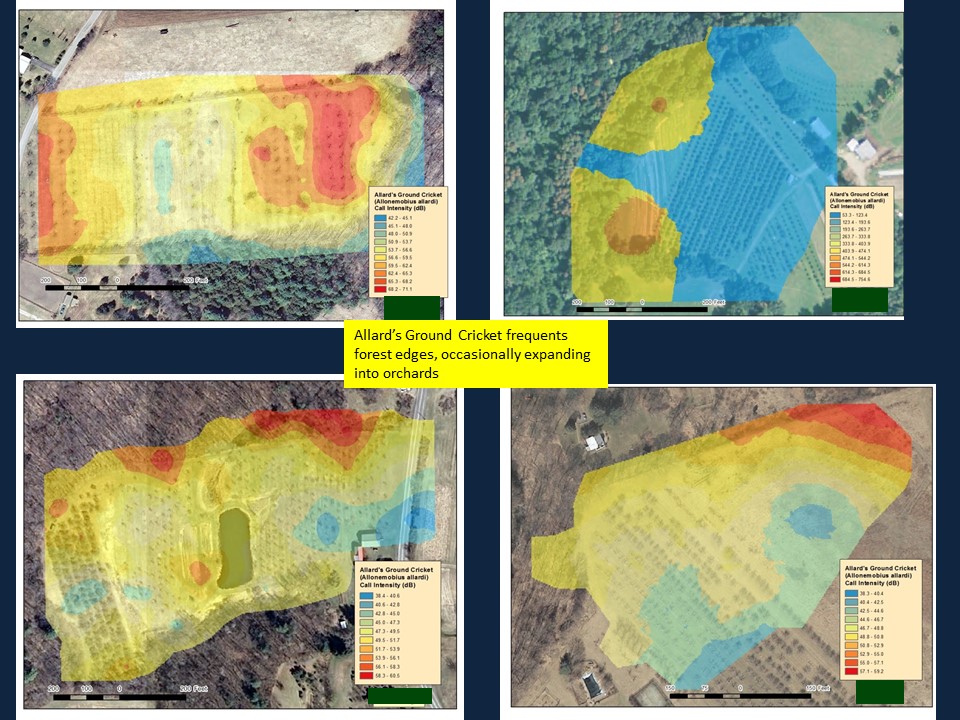 Want to hear what we think was an Allard's Ground Cricket? Listen to this: 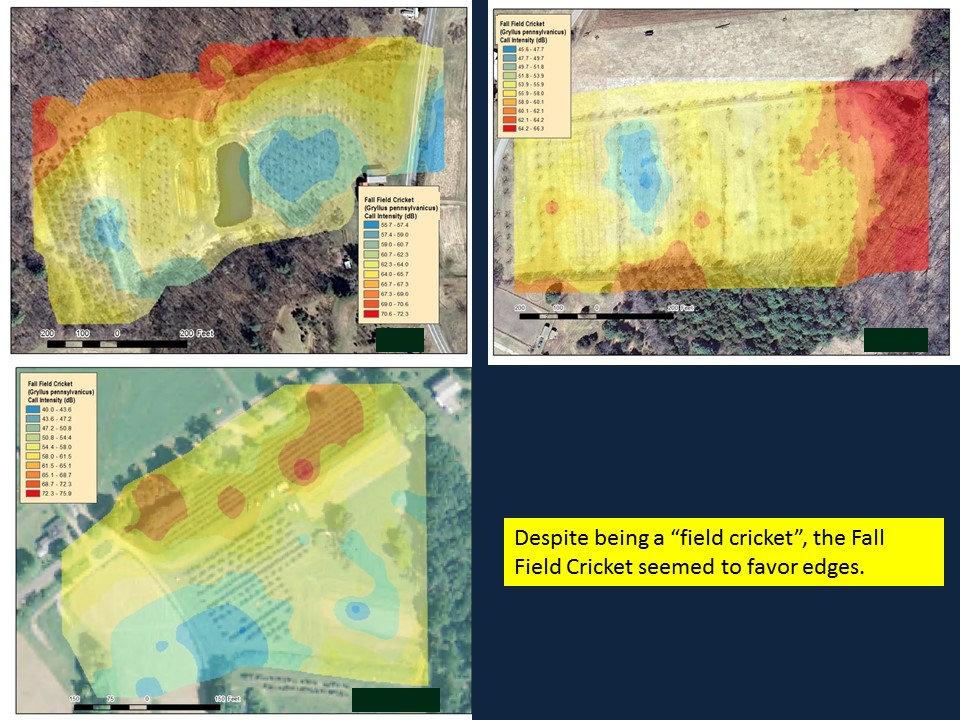 Want to hear what we think was a Fall Field Cricket? Listen to this: 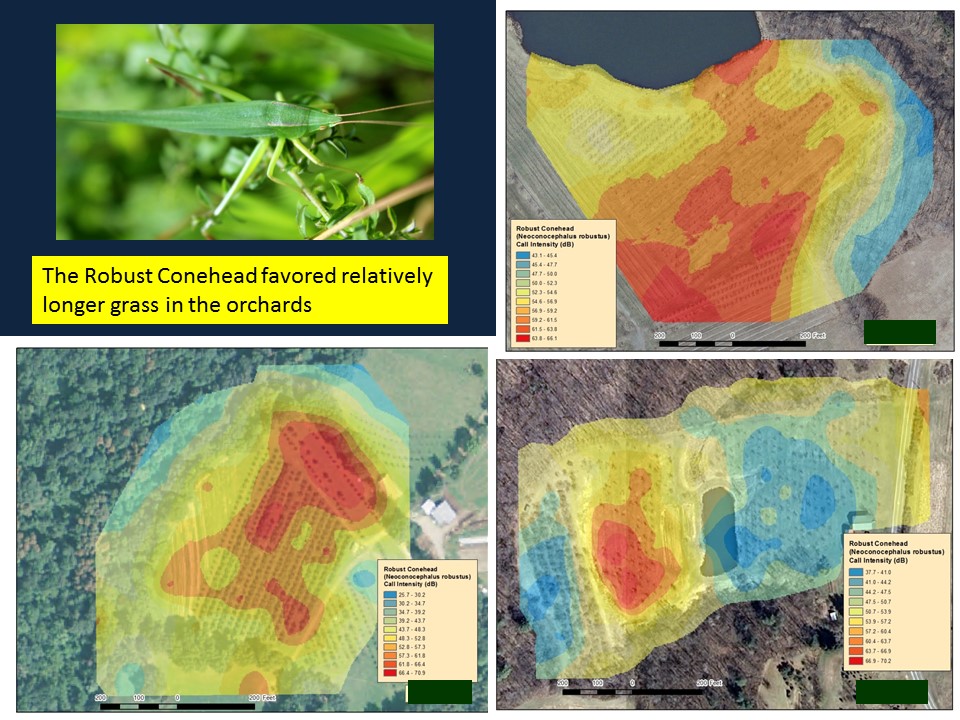 Want to hear what we think was a Robust Conehead (gotta love that name!)? Listen to this: 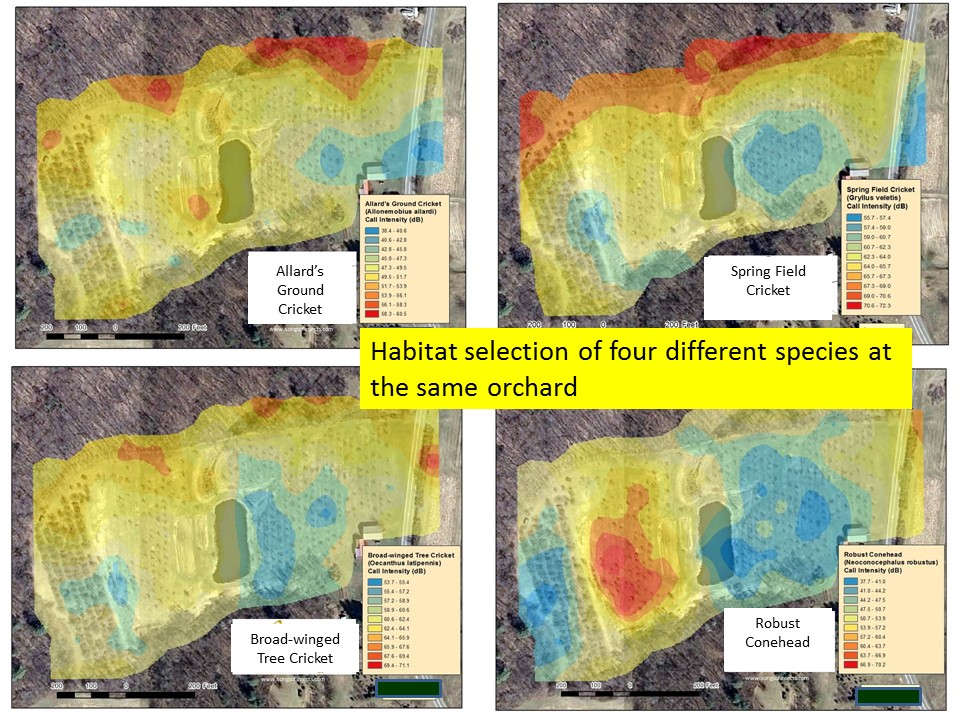 Our plan is to continue our work by replacing our walked grids with a grid of DIY remote recorders, each programmed to record a snippet of sound at regular, synchronized intervals. We're hoping this will allow us to create multiple maps across the day and night, images we'll try to assemble into animated sound maps. Stay tuned.