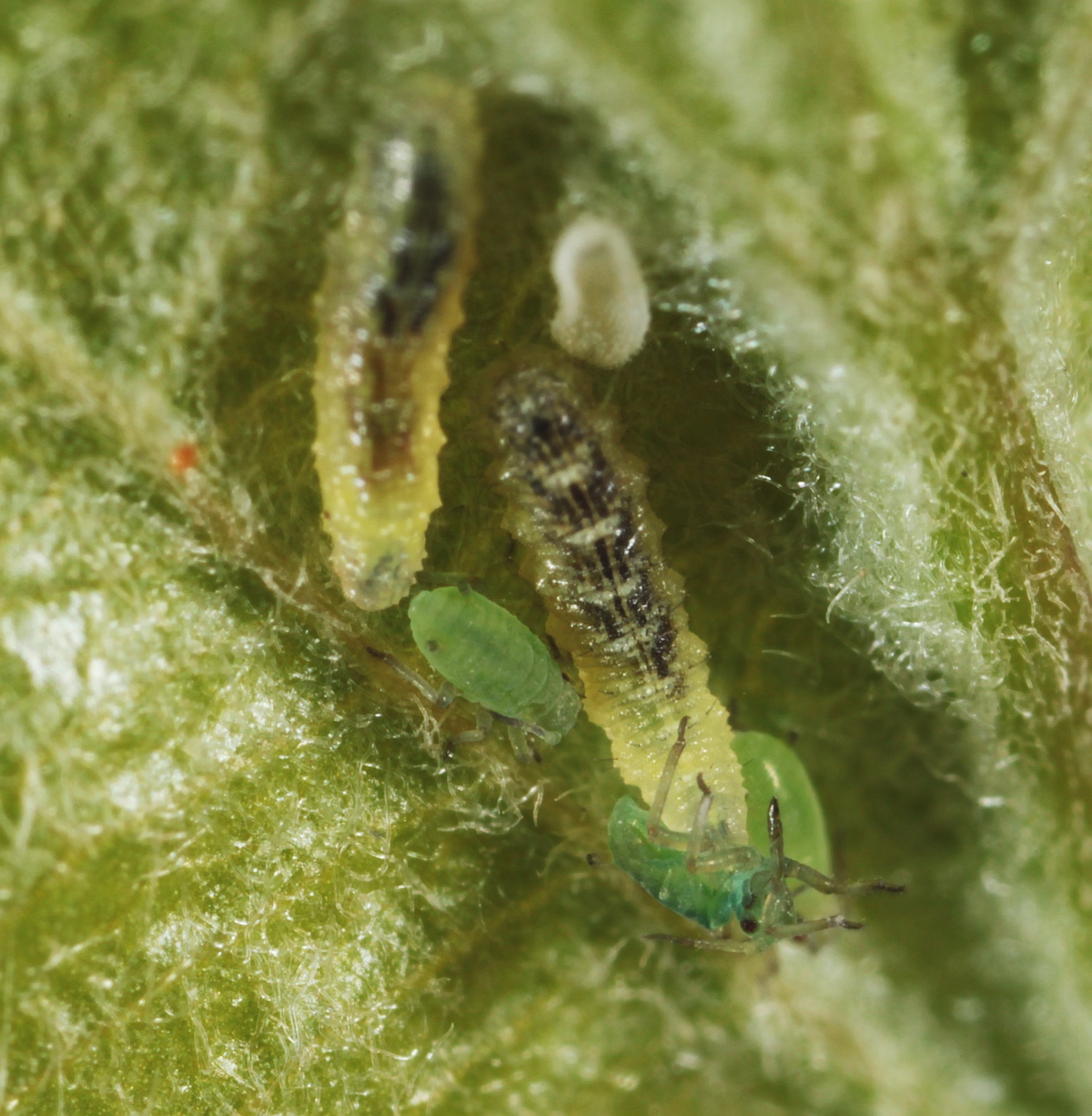 During the summer of 2014, some of us spent quite a bit of time nosing around a few Hudson Valley apple orchards. Our central, if general, question was 'how do orchard production and surrounding nature interact?'. Or, in other words, 'how can apple production help wild organisms?' and 'how can wild organisms help apple production?'. Below are some of our findings.

This link leads you to Jan 2015 report on that project. It doesn't quite contain all the data, but it summarizes our general results.

The summary below was written only part way through the 2014 field season. It is thus much less complete than the above report. However, it has more pictures and might, in some ways, be a more friendly intro., so I left it up.

During 2014, we're looking at some of the ecological interactions between orchards and their surroundings: What habitat do adjacent lands provide for pests and beneficials? What role might such lands play in nature conservation? To look at these questions, we're working with seven different orchards around the Hudson Valley: Threshold and Thompson-Finch in Columbia County, Breezy Hill and Fishkill in Dutchess County, Westwind and Stone Ridge in Ulster County, and Saratoga Apple in Saratoga County. This is only a Pilot Project meant to better understand the best techniques to apply during a full-scale study. Our sample size is small and our techniques far from perfected, but we did want to summarize some of our early observations. Thanks to these growers and to an array of apple orchard scientists who have been willing to share their time and expertise.

In each orchard we're looking at the abundance of pests and beneficials along a line of sampling points from adjacent 'wilds' into the orchard itself. This generalized diagram might help you 'get the picture': 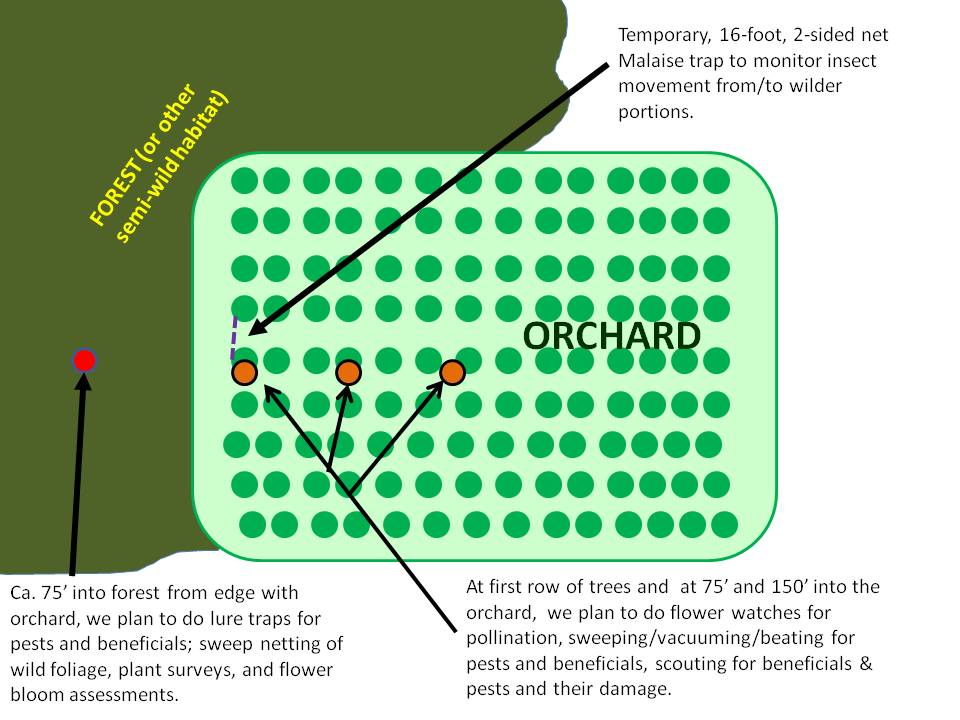 A simplified diagram of where we're sampling in the orchards.

At each of our four sampling points in each orchard, we are using various techniques to assess the abundance of relevant insects (and other invertebrates like spiders and mites) and their effects (such as pollination and damage to leaves and fruits). We are also using a 18-foot long net trap to try to catch insects at the edge of the orchard. If the 'wilds' are playing a role in the dynamics of orchard insects, then we should be able to intercept their movements as they enter or leave the orchard, and we might predict that they and their effects are most common near the edges.

The results presented here are preliminary, I've attempted no colorful graphs or statistical analyses yet, just some basic data to let anybody who's really interested start to get an idea of what we're seeing.

Results of tree inspections in late April and early May, averaged across orchards. A total of 1696 leaves were inspected; "Hover Flies" refers to their eggs.

The highest proportion of leaves with damage was found on the edge trees, although aphid density was highest at 75'. Hover Fly egg density was also greatest at 75' - not surprising since Hover Fly mothers seem to be able to seek out aphid colonies for their eggs. The best way to study this would be to have leaves with equal numbers of aphids in containers at each distance into the orchard - something for next year or my next life. 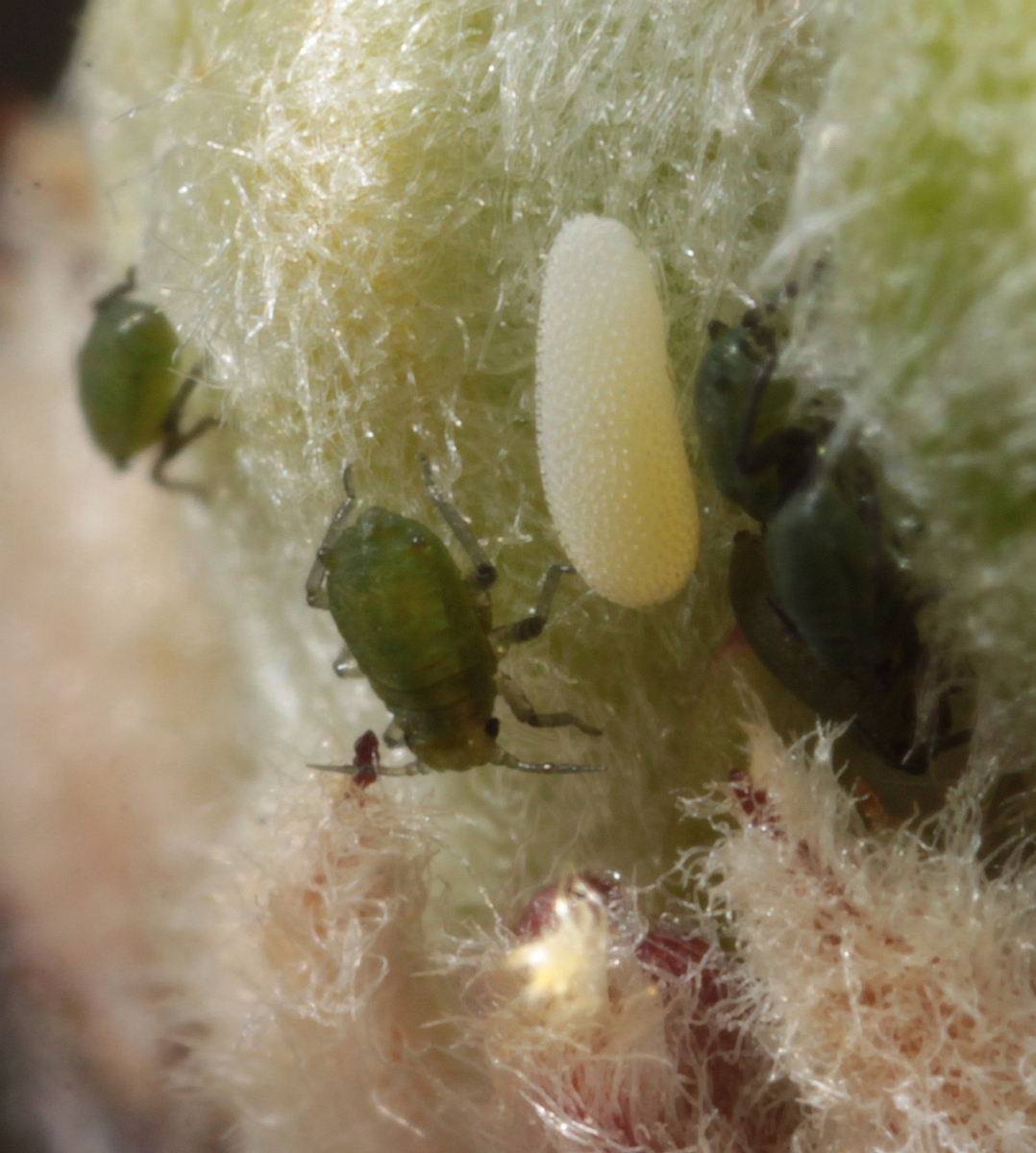 A time bomb of sorts - a Hover Fly egg resting amongst aphids.

Pretty soon bloom came along and we spent a couple of weeks in mid-May observing bees. Again, we looked at bees at three distances into the orchards. Although it would be ideal to just look at bees on apple blossoms, some of our trees didn't flower very much and some of our surveys during peak bloom were dampened by the weather. Thus, duirng a second trip to each orchard, we also looked at bees on wild flowers found adjacent to our study trees. For our purposes here, we have lumped all these data. At each collection of flowers, we watched bees for 10 minutes, tallying how many came and whether they were Honey Bees or one of our other wild, mostly native bees. 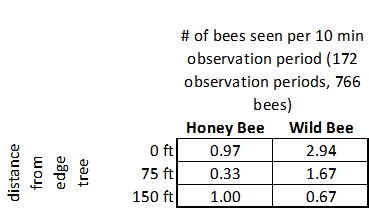 A couple of points are interesting here. First of all, we saw more native or wild bees than Honey Bees, although this is not a direct index of pollination activity, because many native bees tend to be more hectic than Honey Bees who, in turn, tended to spend more time on each flower. On the other hand, some native bees, because of morphology or behavior, cause more pollination than Honey Bees. It is clear however that native bees are an important component of apple orchard pollination. The data also suggest that those bees are entering the orchards from the edges and that their density declines the deeper one gets into the orchard; Honey Bees, on the other hand, showed no such pattern. 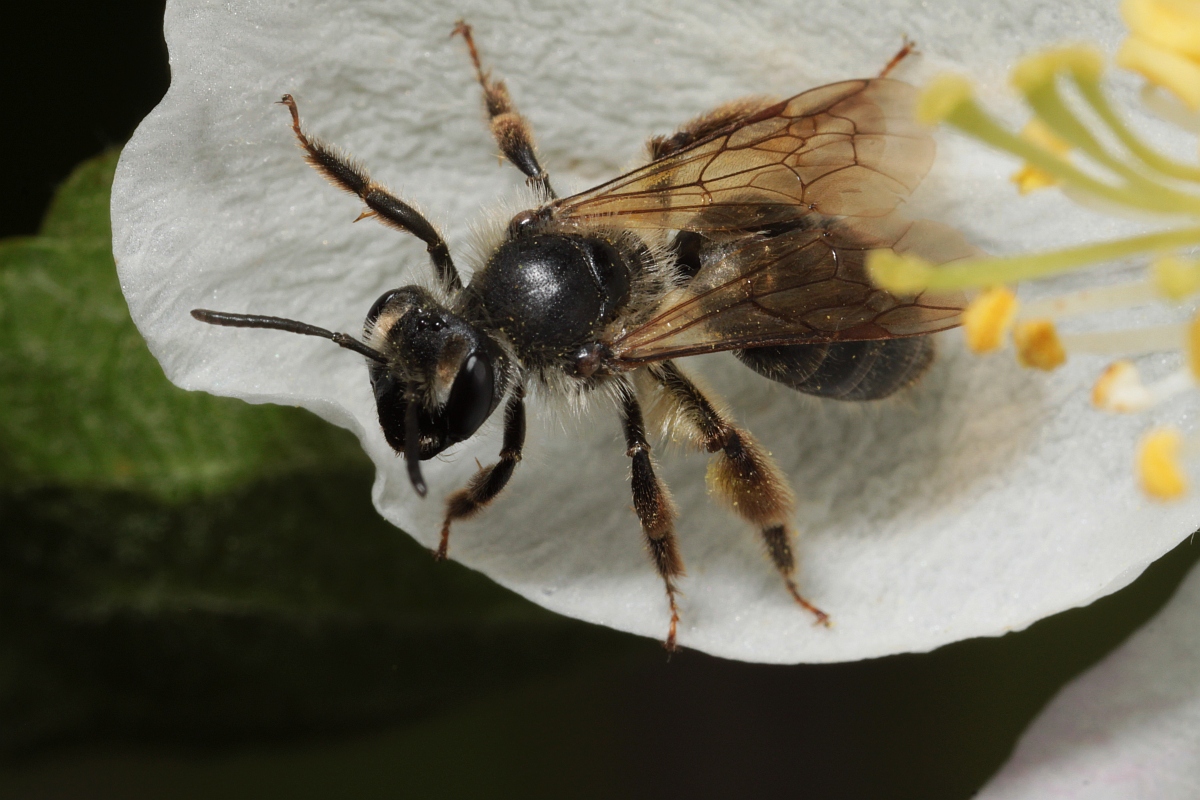 An Andrena bee, one of our native pollinators, resting on an apple petal in mid May.

This is a good point for introducing data from our net trap.

Some of the insect groups captured in the Malaise trap set up along the orchard edge. This trap let us determine which direction the given insect was traveling in. These are total captures for 3-hour trapping sessions at six orchards (we got rained out at one orchard).

These data were collected after orchard bloom and so cannot be directly related to our pollination observations, but it's clear that more insects appeared to be entering the orchards during this time period than leaving it and also that flow across the edge in any direction includes ample wasps, bees and flies. Many species of wasps and flies are considered beneficial in orchards because they are pest parasites. A few fly species are also considered pests, and we're honing our identification skills so that we can try to tell these apart. European Apple Sawfly, a pest in the wasp group, was not counted with the wasps; and few were observed. 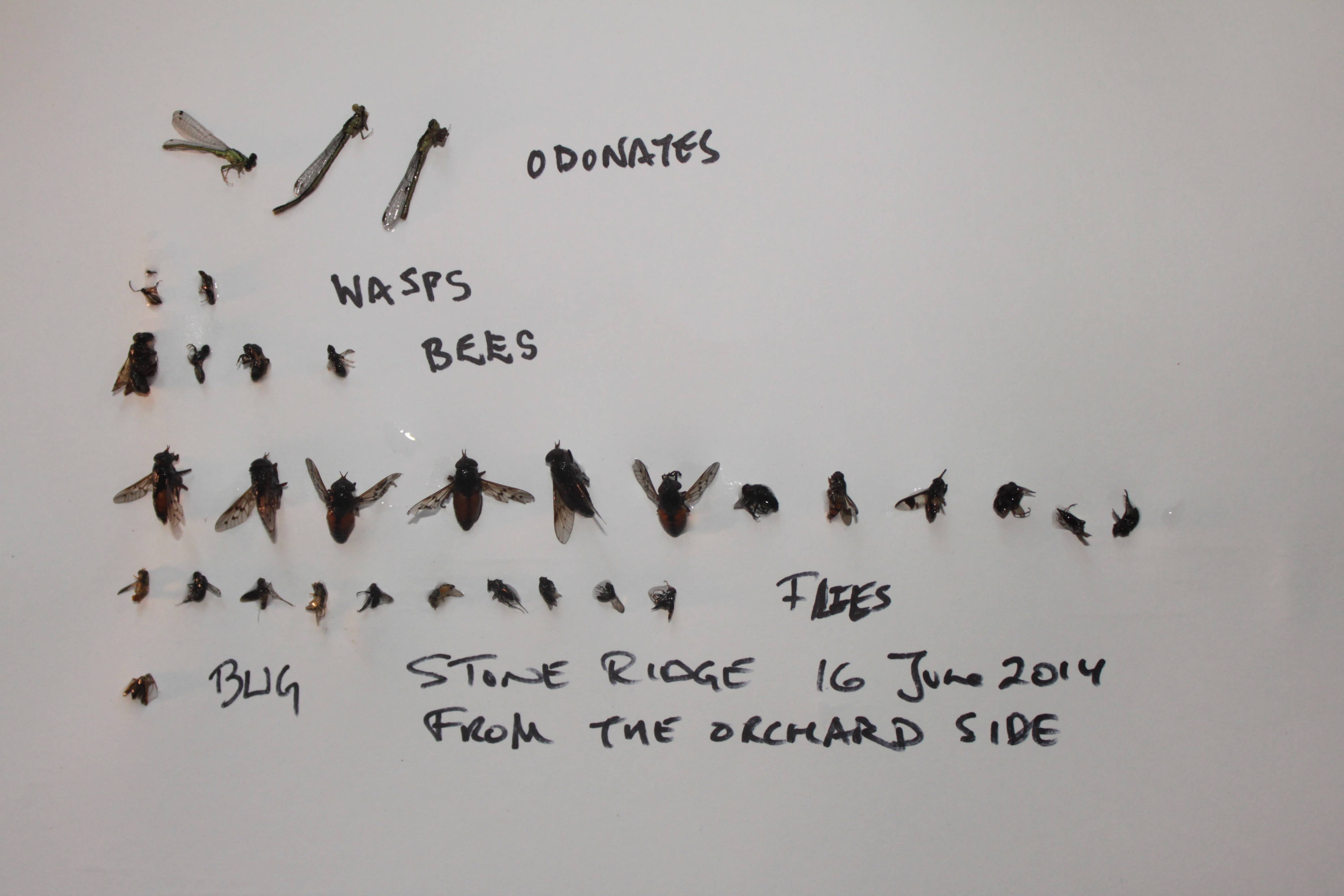 Insects captured flying out of a June orchard.

Insects captured flying into a June orchard from the surrounding uncultivated area. Note the abundance of beneficials - bees and wasps.

After flowering, our next set of inspections, in mid-June, focused on assessing damage to fruit and leaves. We did this by inspecting leaf shoots and fruit clusters at our study trees.

The damage and aphid abundance observed on our study trees in both conventional and organic orchards.

Although we did see and record pests and beneficials other than aphids, aphids were the most commonly observed and hence the only ones I've included in this first summary. I have separated conventional (2 of our orchards) and organic sites because, as others have suggested, edge may be playing a different role under these two forms of management. In conventional orchards, more of the in-orchard pests and beneficials are eliminated by pesticides and so most of these must regularly re-colonize an orchard from its edges. In organic orchards, on the other hand, more pests and beneficials are resident in the orchards and so 'edge effects' may be less. This is suggested in these data where, for the conventional orchards, leaf damage and aphid density are highest at the edge, whereas no such pattern is evident in the organic orchard. Thus, one might say, managing edge damage is more of an issue for conventional growers than organic ones. As one might expect, leaf damage and aphid densities were somewhat higher in the organic orchards.

The larva of a Lady Beetle consumes an aphid.

Finally, we have also completed one round of fruit scouting. This seems to be a banner year for Plum Curculio, an apple-eating weevil. Theirs was by far the most common form of damage we observed during our mid-June surveys and hence the only fruit pest included in this first analysis. Again, we split out the conventional and organic orchards.

The effects of pesticide application are evident when comparing the total Plum Curculio damage between conventional and organic orchards. What is less clear is the role of edge in providing refuge to this beetle. Edge has long been considered an over-winter refuge for this pest although, as remarked above, that might be less true in organic orchards. It may well be that the size of our sample and/or the fact we do not enter the orchards very deeply is masking the role of edge in supporting Plum Curculios. Yet another topic to follow-up on...

That is all we have for now; the study continues and I hope to be able to update these results in a month or two. 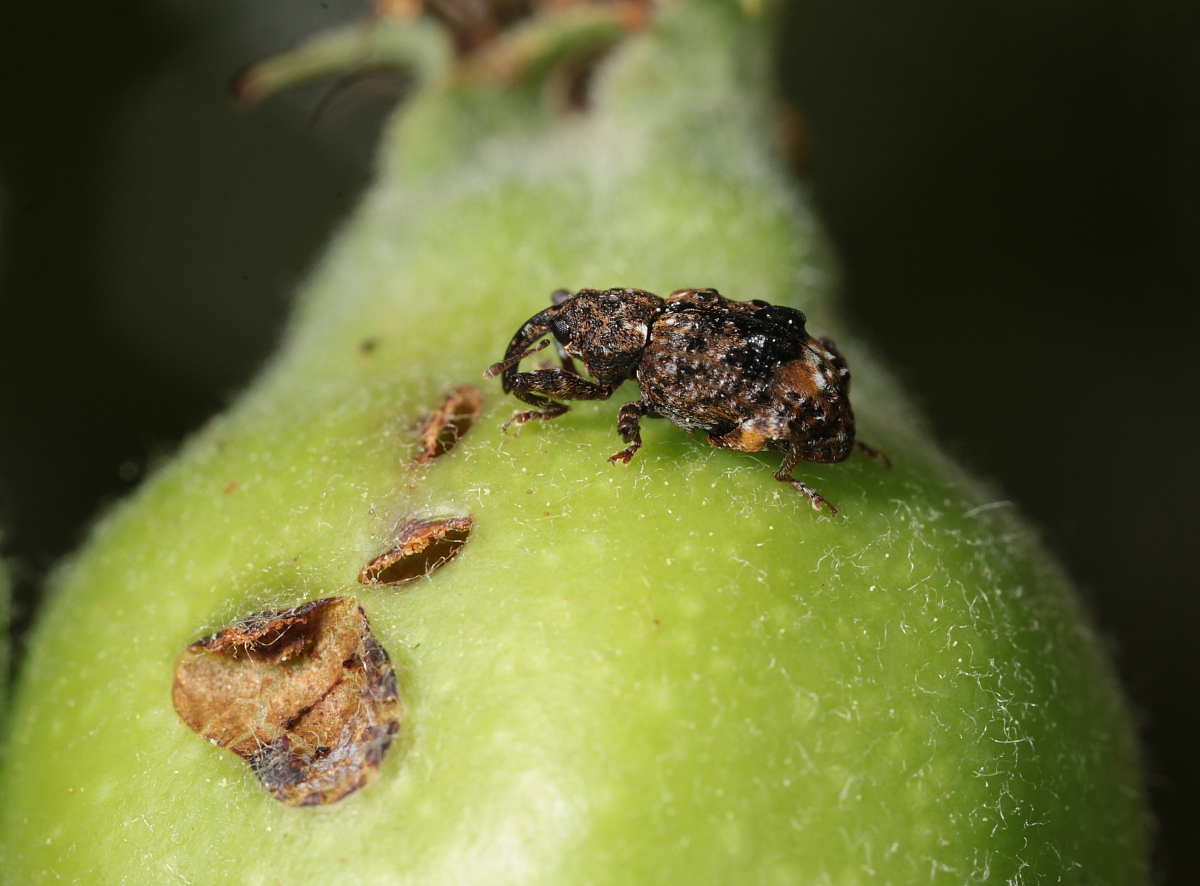 A Plum Curculio resting on a young apple beside the scars from its work.