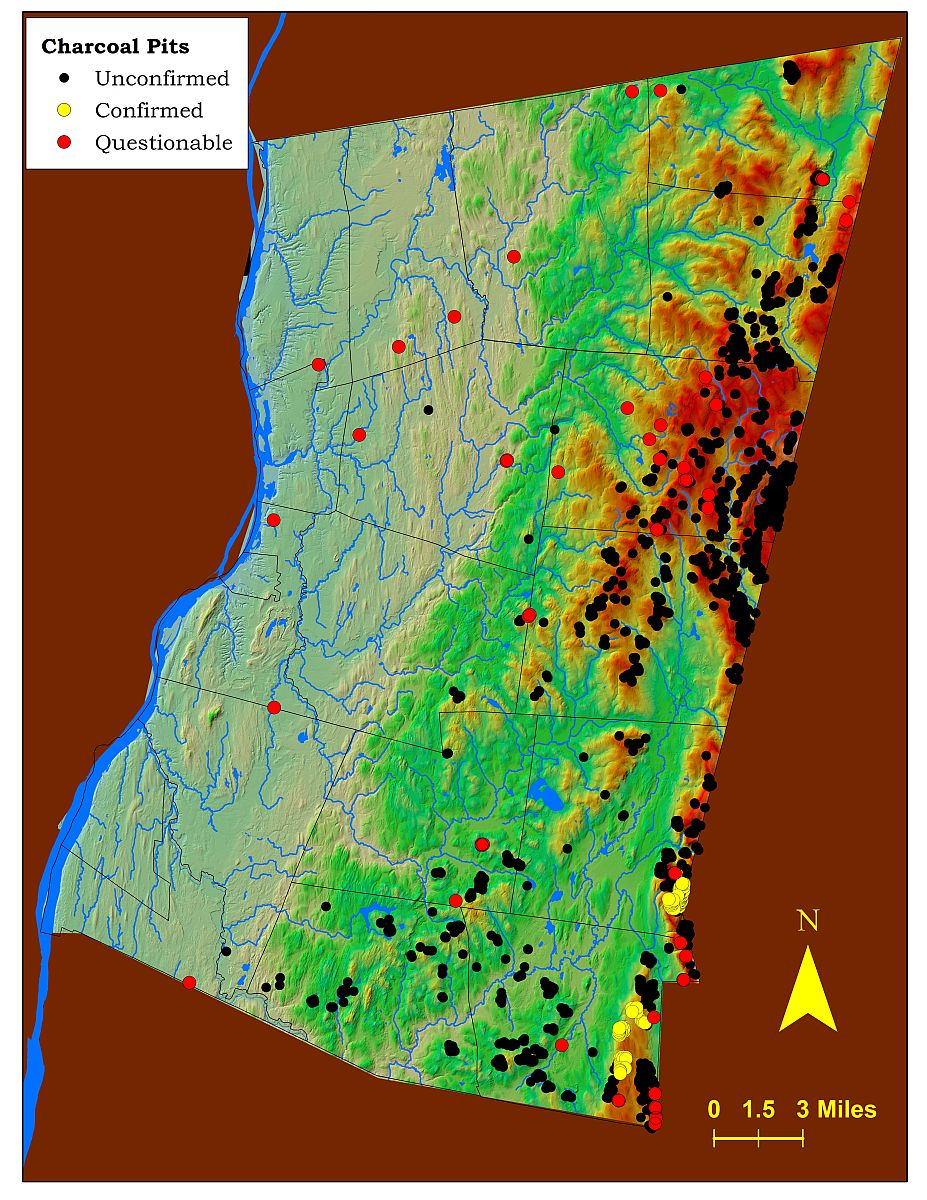 Draft map of the charcoal pits of Columbia County. Note that most pits are "Unconfirmed" meaning that nobody has visited them in person to confirm that charcoal is present. A few of our LiDAR-mapped pits seemed questionable on the LiDAR image. Many of these are in the western part of the County, and it would be very interesting to confirm or reject them. Finally, through our own work and that of Edgar Masters, we have already confirmed some of the pits. See below - your fieldwork is invited! (Click on map to enlarge it.)

To see a zoomable version of the above map, click here (thanks to Lucas Braun for spontaneously creating this for us!)

In-forest charcoal making was part of the colonial landscape and extended into the 20th century. Charcoal making is an ancient art, and colonists no doubt brought European techniques with them. Livingston’s Ancram iron furnace, founded ca. 1749, burned charcoal; and smaller scale operations likely existed before that. The traditional round charcoal mound was in use in England (where it was called a “clamp”) at least as early as the Middle Ages. In Columbia County, charcoaling has primarily been associated with the charcoal-iron industries, first at Ancram, then at Copake and Chatham during the 19th century. However, charcoal was also in demand by blacksmiths, tin smiths, glass blowers and others needing a hot, clean fire. In addition, it was used by locomotives entering cities because its burning produced relatively little smoke. 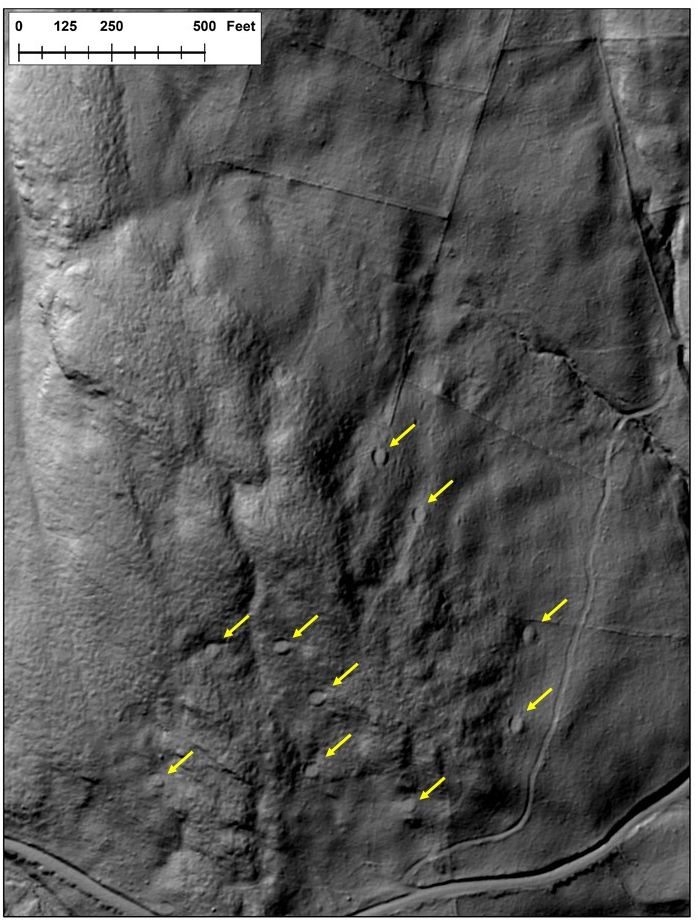 LiDAR imagery of a Hillsdale hillside (try saying that five times fast!). The yellow arrows mark apparent pits. Notice how former farmland, outlined by the rectilinear stone walls, abuts the charcoaled forest, but the pits were in the forest itself or along its edge. (Click on image to enlarge it.)

As will be explained below, 'pits' weren't true pit, but rather were cordwood mounds. As a base for their mounds, colliers created flat, circular areas roughly 35' across, and, although the mounds themselves were burnt long ago and the resulting charcoal carried off, the circular flats remain. These are not always conspicuous as you walk through a forest, but luckily, a newly available form of topographic aerial mapping called LiDAR (“Light Detection And Ranging”) provides us with a crucial overview of the landscape’s microtopography and allows us to remotely map the location of pits across the County.

Hours spent inspecting a county-wide LiDAR map (mostly the work of our son, Otter) produced a detailed map of Columbia County pits. Ground-truthing at a couple of sites suggests that 90-95% of these pits truly are former charcoal mounds (the remainder may be small circular wetlands, natural mounds and other structures). As the map at the top of the page shows, our charcoal pits are found primarily on the hilly eastern frontier. Many of these pits probably helped supply the Copake Iron Works, although Mt. Washington in MA and lands in Vermont are referenced as the main sources of that iron works’ charcoal. Furnaces in Chatham and Millerton NY and Richmond MA may have also received some of the local charcoal.

Broadly speaking, charcoal making was a two-step process: first, the four-foot long wood had to be cut, gathered, aged and brought to the burn site; secondly, that fuel was constructed into a mound and carefully burned to produce charcoal. These two steps may have occurred at different times of year and may have been done by different individuals. Because charcoal was noticeably lighter than wood, charcoal manufacturing (before the spread of permanent charcoal kilns) usually occurred in the forest, and it was the charcoal that was then transported to its site of sale or use. For transport and quality purposes, wood was best cut in winter, off-season work that could provide farm families with additional income. The subsequent burning of the wood occurred mainly during the growing season. Because special skills were needed and because most farmers were busy at that time of year, this work was often the task of the collier, who erected the mound and managed the burn. Colliers tended to be recent immigrants skilled in the trade, but coal burning was a low-status job and its practitioners were sometimes social outcasts, as one popular term for them, ‘Raggies’, suggests. (Although that may have originally been a corruption of Riga, in references to Mt. Riga, where much charcoaling occurred.)

The goal of the burn itself was to manage a wood fire so that water and impurities were burnt off, but the carbon fuel itself remained. The resulting charcoal was more porous than wood (and hence allowed greater oxygen permeation and a hotter burn), and it burned relatively clean, an important characteristic when one wanted to produce a high-quality iron. The basic logic of charcoal making involves heating wood to a temperature at which a slow, non-oxygen-demanding burn (called pyrolysis) begins. Once begun, that burn is self-sustaining so long as its fuels remain, a quicker oxygenated burn does not start, and temperature is maintained. Under these conditions, a nearly pure carbon fuel is formed which burns readily in the presence of oxygen. The collier’s art was thus to initiate the pyrolysis through a conventional wood fire, but then to encourage that pyrolysis while squelching the oxygen-fed burn.

This fine tuning was accomplished through the construction of the mound or clamp. Various on-line resources detail a mound’s construction; this video, which we had no hand in producing, seems particularly informative. The historical images below, all from the National Archives or the Library of Congress, also illustrate the process. In brief, a cleared, flat area was first created in the forest. A central chimney was built of split wood and the 4’ logs were carefully laid around that in two or more layers to form a solid wooden mound 30-40’ in diameter. This was covered with leaves and other organic debris and sealed with dirt. A fire was started in the chimney, and once it spread, the chimney was sealed and the mound carefully tended to insure that oxygen did not enter. After about two weeks, pyrolysis had more or less burnt itself out, and the mound was allowed to cool. Finally, it was raked open or "drawn", and the charcoal gathered for shipment. At any stage in the process (including the transportation!), an uncontrolled, open-air fire could destroy the fuel, if not also cause property damage and/or injury. 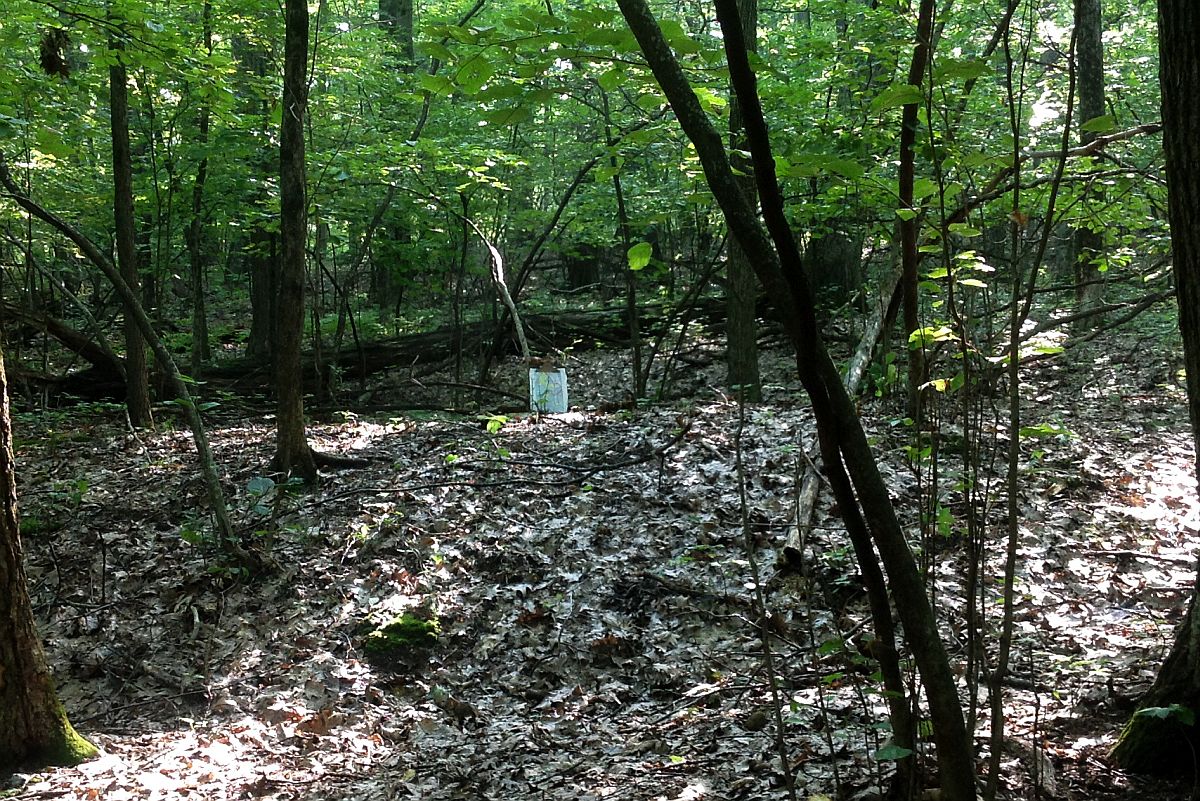 A recent view of a charcoal 'pit' - these appear as small terraces in the forest and can sometimes be inconspicuous. In this shot, a clipboard is propped upright in the center of the 'pit'.

Charcoaling with mounds faded from our landscape around the turn of the 19th century. To some degree, it was replaced by the use of permanent kilns to which cut wood was hauled for use. These permitted more efficient, controlled burns. As transportation expanded and coal became widely accessible, it replaced charcoal at some furnaces - although charcoal iron and coal iron existed side-by-side for a while, because charcoal's greater purity produced superior pig iron. Gradually, the area lost not only charcoaling, but the entire iron industry as it shifted west to where much larger iron ore deposits exist. Today, coke is apparently used to fuel most blast furnaces. One can think of coke as 'charcoaled' coal, i.e., the coal is heated in the absence of oxygen resulting in a purfied coal product. Iron ore mining, smelting, charcoaling, iron casting, and blacksmithing are long gone arts in our county, but charcoal pits are one of that era's most enduring legacies.

Will Ouimet of UConn, together with colleagues and students, has been using LiDAR to study the charcoal pits and stone walls of Litchfield and Berkshire Counties. For more on their work, see this web page. We've shared our pit maps with them and, at some, point charcoal pit aficionados will have a regional map to admire.

In addition, 200 Years of Soot and Sweat: The History and Archeology of Vermont's Iron, Charcoal, and Lime Industries, Victor R. Rolando's excellent study of those industries, is now available free on-line thanks to the Vermont Archeological Society.

This publication from Hopewell Furnace also looks interesting. And don't forget to check out the Copake Iron Works! 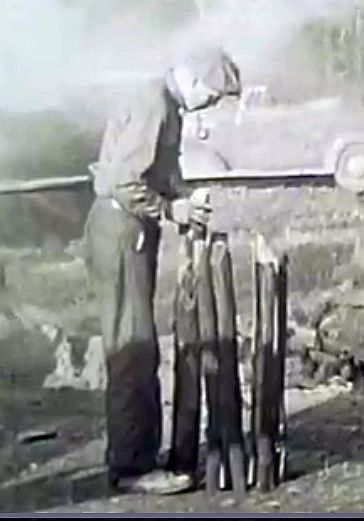 This collier began his mound with a circle of stakes hammered into the ground. The video mentioned above shows a more intricate chimney construction, but, in either case, the goal seems to have been to ensure a hollow core into which a fire could eventually be introduced. This movie still actually comes from a demonstration of a modified charcoal pit, but the starting steps were presumably similar. (still from video courtesy of the Harvard Forest) 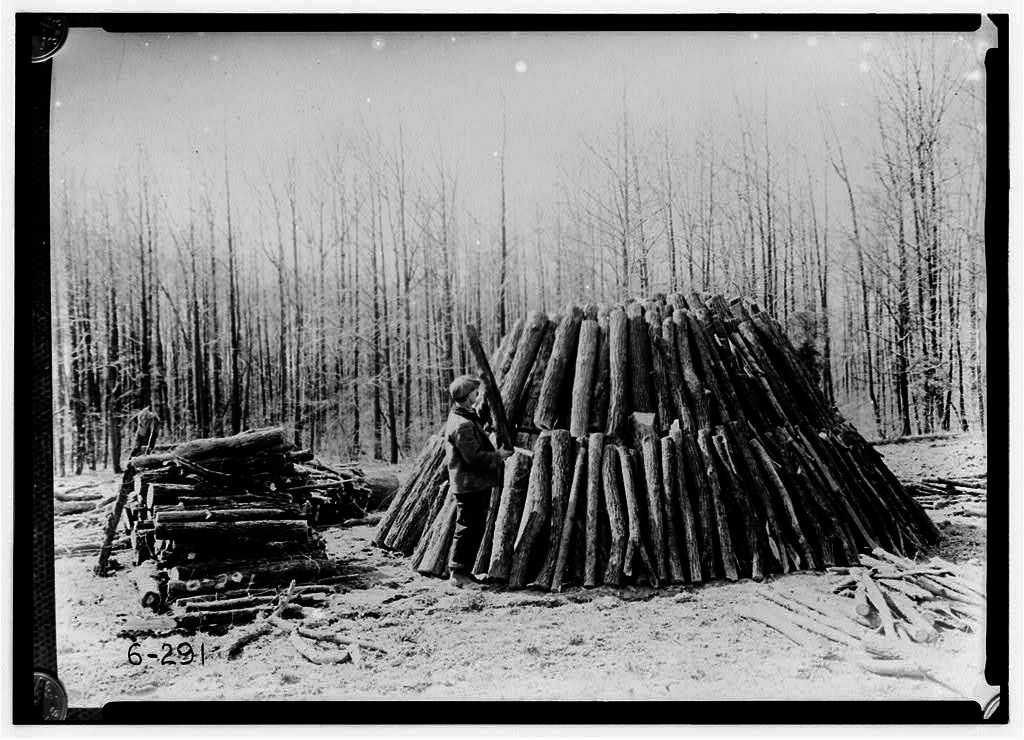 Creating the core of a charcoal mound - the roughly 4' long logs were placed upright around a hollow chimney. (photo Library of Congress) 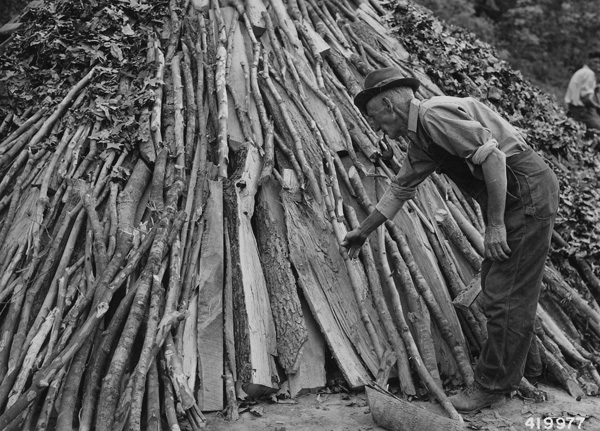 A collier placing small pieces of wood (so-called lapwood) in the cracks between the larger cordwood. Apparently, this helped to seal the mound and so facilitate charcoal formation. (photo National Archive) 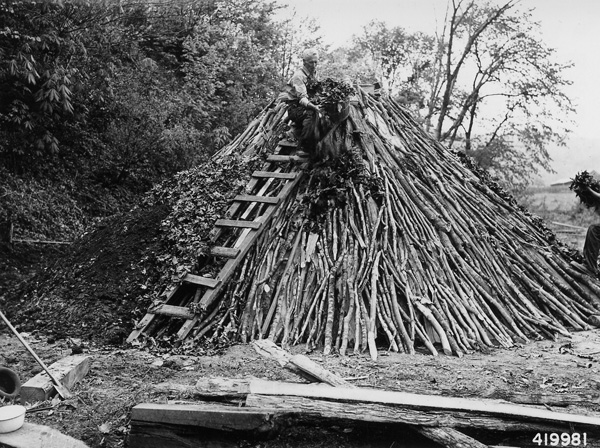 A collier covers the mound with wet leaves to help seal it. (photo National Archive) 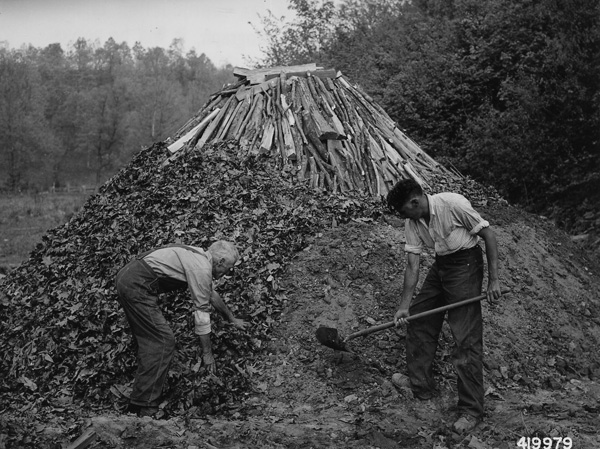 The sealing process continues with a layer of dirt atop the leaves. (photo National Archive) 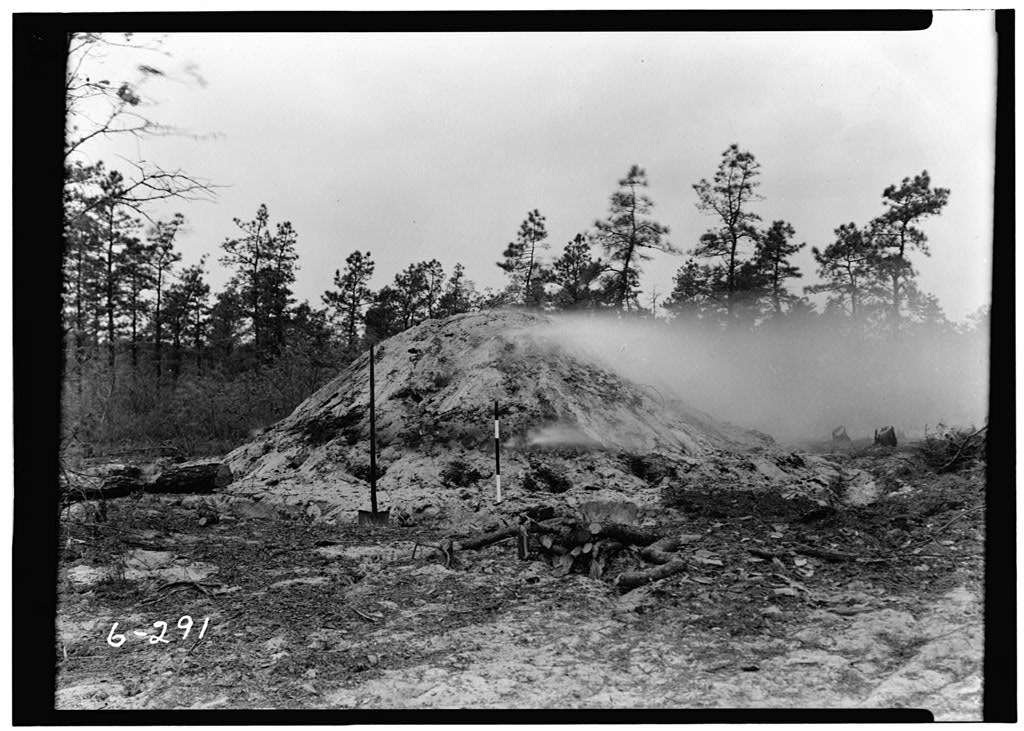 A charcoal mound mid burn. Burns might last up to a couple of weeks. (photo Library of Congress) 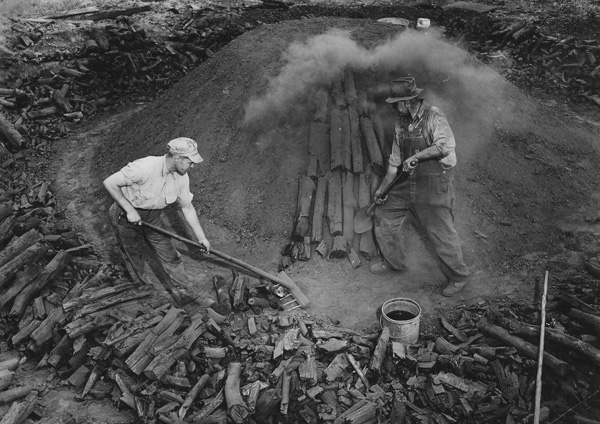 Colliers rake open the mound after the burn is finished to reveal the charcoal. (photo National Archives) 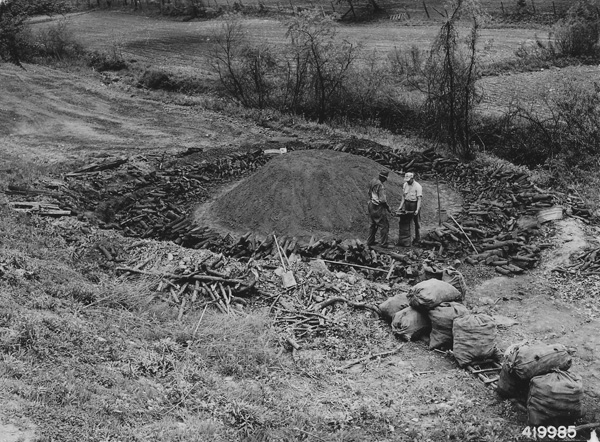 The ready charcoal is bagged. To be honest, this image confuses me a bit - the colliers have clearly removed ample amounts of charcoal from the mound and yet an earth-covered mound remains in the center. My only guess derives from a comment that colliers covered burnt mounds with dirt whenever they weren't working on them.to make sure no fire blazed up. Perhaps these men have stripped away one layer of charcoal, and then re-covered the mound while they bagged their first load. The images original comments do refer to the fact that another day of raking would still be needed to finish the process. (photo National Archives)